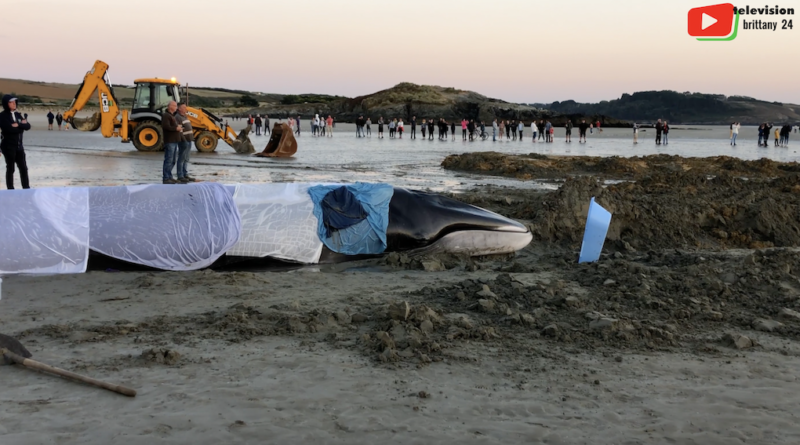 Brittany / Ploéven – The whale was the third this month to have found itself stuck on a Finistère beach. Miraculous whale beached in Brittany regains the sea.

Volunteers from NGO Sea Shepherd worked to create a channel of water around it Sea Shepherd France announced that these efforts had worked. Sea Sheperd France volunteers then took turns on the site to hydrate the whale with wet sheets to protect it from the sun. The “young 12-metre-long whale” was beached on the Plage de Ploéven in Finistère, where it was discovered by walkers. A finback whale which was found beached on a Brittany beach has returned to the sea after a rescue operation running into the night.

After obtaining permission to approach the animal, the association did everything to help the whale. After her tow failed, the worst seemed to come, but Sea Shepherd still had hope. For Sea Shepherd, it’s a real miracle. Via Twitter, the association further said: “Miraculous!!! The whale is gone!! Some said he was dying, lost, tide too low, we helped him and he understood! He put all his energy into getting back and with our helphe arrived there, it was magnificent !!” The whale was later seen swimming in a bay a few kilometres away, although Sea Shepherd warned that it was still at risk of drifting back on to a beach. This whale was the third cetacean to have been beached in Finistère ( Brittany – France ) since the start of September.