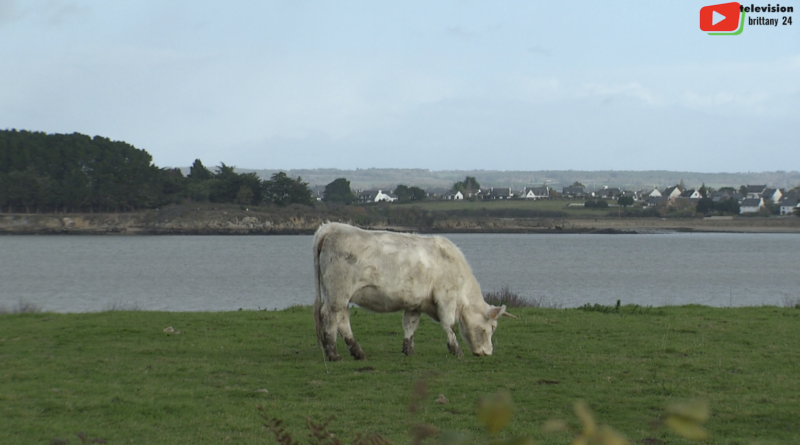 Brittany / France – Discover the island of Tascon in the Gulf of Morbihan. Tascon Island can be visited from Saint-Armel, accessible on foot from an 400 m roadway.

The Tascon island is situated in Morbihan golf. The access can be done by a road two hours before and after the low tide. There are 8 permanent residant during the year but the island is more touristic during the summer. Tascon is globally recangular in shape; its longest diagonal does not exceed 1.5 km. With 55 hectares, it is the third island in the Gulf by area.

Ile Tascon is linked to the mainland by the Tascon raft which is located on the coast of the town of Saint Armel. This submersible causeway connects the island of Tascon to the “mainland” parts of the town. Passage is only possible at low tide, about five hours per tidal cycle, for cars and pedestrians. The raft is about 400 m long.

There is a hamlet in the center of the island, grouped around a farm, and a few second homes in the south-east. It has the particularity of being one of the last cultivated islands in the Gulf. The eastern cove of Tascon is home to the second largest dwarf eelgrass (Zostera noltii) meadows in the Gulf of Morbihan, covering an area of ​​around 130 hectares.

Various species are counted there, including large numbers of Mallard, Northern Pintail, Brent Goose, Silver Plover and especially Dunlin. On average, at the height of the season (November to January), more than 10,000 geese, ducks and waders can be counted in the area in a single counting day.

Bignan / Brittany – The Kerguehennec Castle is a notable place in Brittany. Its castle and its grounds, remodeled in