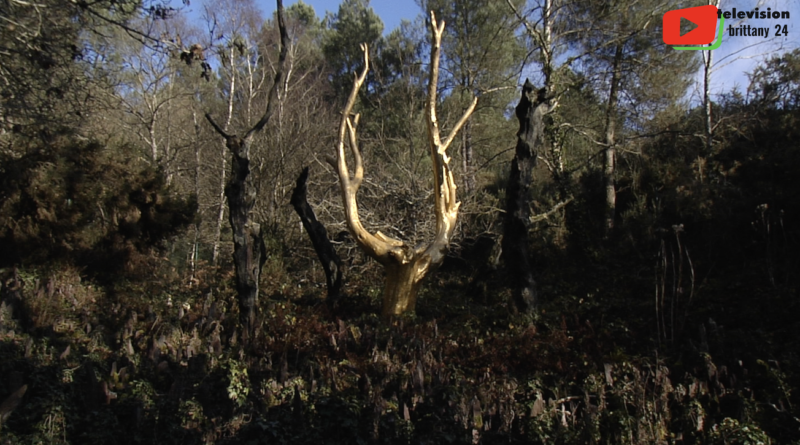 Brittany / Paimpont – In the lower part of the Valley of No Return, in the village of Paimpont, the Tree of Gold is a work of art designed by François Davin in 1991.

In the lower part of the Valley of No Return, in the village of Paimpont, the Tree of Gold is a work of art designed by François Davin in 1991. In 1990, a dreadful fire devastated over 400 hectares of moors. This tree covered in actual gold leaf represents the rebirth of the forest, but also the fragile and precious nature of the forest.

It is surrounded by five trees burnt to ashes that symbolise the disappearance of nature. In the small town of Tréhorenteuc, the church of Saint Onenne harbours surprising stained-glass windows. In 1942, Father Gillard was appointed rector of Tréhorenteuc, a small and isolated village. The inhabitants had turned away from faith, the church was falling into disrepair… What a sad sight for the parish priest! But he was a true original: he was convinced that all religions stem from the same faith. When he discovered the force of legends in Brocéliande, he decided to transform his church to shine a light on the gospel through the myth of the Holy Grail.

Many wonders are associated with this renowned forest. The little people of the forest thrive here (dwarf-like spirits also known as korrigans or poulpicans, fairies, witches…). Mischievous and cunning, they trace your every step especially when you stumble… Also, since the Middle Ages, a number of fountains in the forest have been known for their lifesaving, magical or evil powers. Their renown goes well beyond the borders of Armorica and has inspired many great authors of chivalric romance. Many Arthurian feats take place in the realm of the mythical forest of Brocéliande.